Thanks for your feedback. We will check and release a quick fix.

After setting the log level to VERBOSE, please reproduce the problem and send us the debug log file :

Change Log Level First, check your settings and change log level to VERBOSE. Go to Settings: [image] Change log level to VERBOSE: [22] Set to DEBUG if you use old version because there is no VERBOSE log level. Get back to DRIVES screen Changed log level takes effect when you leave SETTINGS screen. Reproduce your problem ! After changing log level you must repeat your steps to reproduce the problem you have. This time it will be logged in relevant log files. Send Log File Within your driv…

There is no credential information in the log files.

Sorry for the inconvenience it may caused.

Hello,
wich one of the log do i have to send to you?
i see several log files, but which is the particular one do you need??

I’ve also sent you the asked logfiles and additionally attached further screenshots of the folder/files I was trying to click to or access to while VERBOSE logging.

Hello, attached to this mail you’ll find the asked VERBOSE logfiles as ZIP archive. I’ve also attached screenshots in chronological order as I was clicking in explorer while VERBOSE logging. You can clearly see, that NETDRIVE3 now since the update append the date and/or time of a file or a folder to the filename/foldername which results in access errors. For example the folder displayed as “2008 $temp” is really named as “$temp” on the SFTP server connected. The misbehaviour appeared directly after the last update at August 30 / August 31. 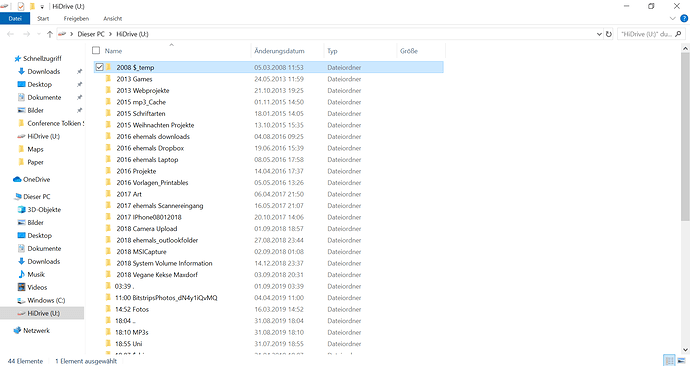 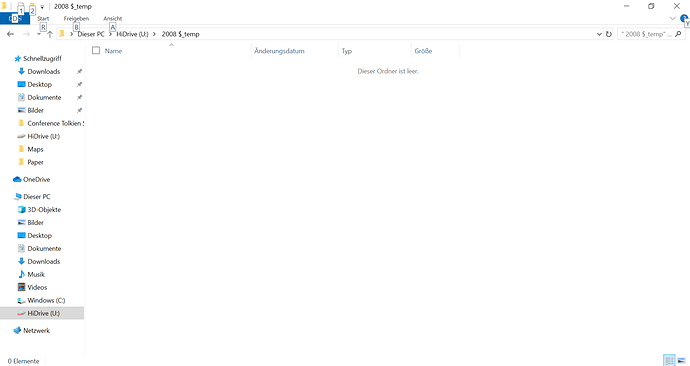 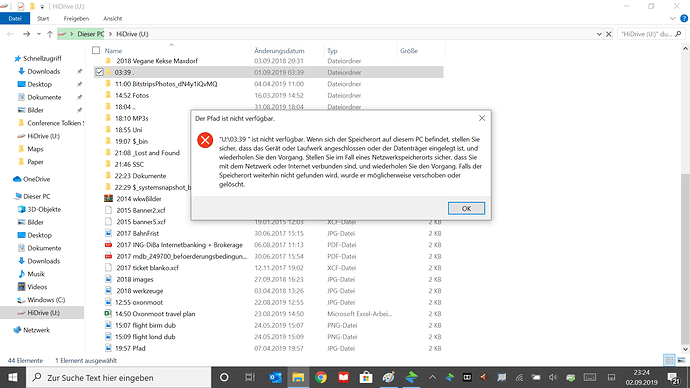 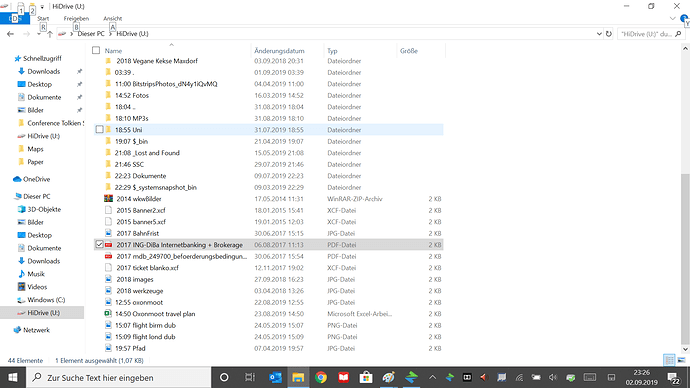 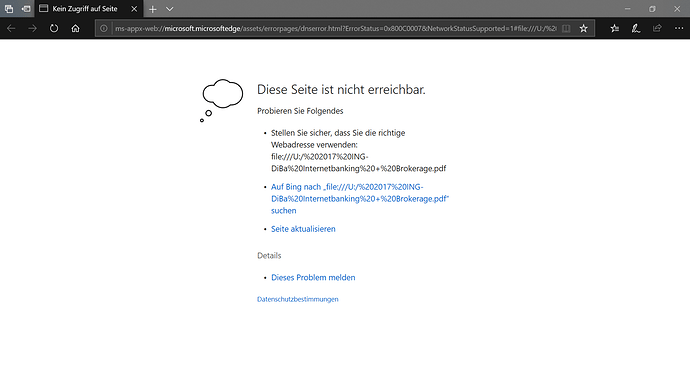 I will fix this issue as soon as possible and let you check it.

The cause is an incorrect parsing of the file list.
For example, the server responds with the following.

Previously, the server would have responded with a user account rather than 1000 or 1100.
This is because NetDrive recognizes 1000 and 1100 as file sizes.
We will fix this problem.

I think you use HiDrive.
If you are in a hurry, why not try HiDrive’s WebDAV connection?

I got the file you attached.

Then your issue will be solved.

Of course, NetDrive will also be fixed for this issues.

Your issue is fixed.

Could you check your issue with a following url version?

is there any way to update without rebooting? i have netdrive on a windows 2019 production server and i cannot reboot anytime i need…

hello,
i updateted the version to the latest as you told me, but it fixed partially my problem. Some folders do not show date anymore (good!), some others show date before folder name.
You can have a look at the screenshot: 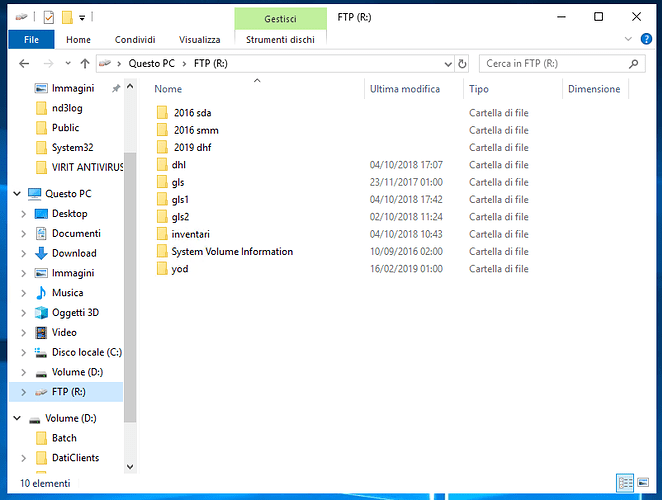 Wait for news as soon as possible. It is impossible to me to use my managment software with this problems!!

Hello, same here. First I updated to the link postet here which resulted in Version 3.8.898 and rebooted. Then I’ve got the same result as @e317-info . Some folder were correctly displayed, some not with the year of the file date attached again.

But wait for this: after reboot I’ve got the message, that again a new version is avaiable 3.8.900. First I waited unsure if the previous fixed worked and I skipped this update to see the result. After realizing, that the patch link posted doesn’t solve the problem I manually updated by downloading from the website www.netdrive.net/download. After installation and reboot I’ve got 3.8.900 now.

Look at this result: now the drive is displayed as empty although connected to the SFTP server with FileZilla everything is fine. As a paying customer the promised SFTP function is essential for me. WebDav is not really an option as we need exact file date time recording when copying files between cloud and local storage which is correctly provided via SFTP & the Strato HiDrive service. Additionally SFTP is needed due security issues.

@jyyoon
I don’t want to blame support, but why is this not tested before publishing such buggy versions at your site / or even in beta phase? Meanwhile other customers and users are also posting the same problem in the support forum:

NetDrive version: 3 Windows/Mac Version: NetDrive3_Setup-3.8.900 Sorry but there is a severe error in this version with was not in earlier versions: My file system as shown by the new version: [900] My file system as shown by version 3.8.888 [filesystem%20with%20older%20version%20fo%20netdrive3] As you can see there are errors in the maps: mnt2 media mnt srv even3 even2 bin lib lib64 sbin When I use version 3.8.888 again all is well again. Please correct this error. Thanks i…

Thank you for the previous attempts to analyze and solve the problem, but this seems to be not the right thing to fix it at all.

To solve the problem I would urgently suggest to publish a fix as soon as possible or to provide a documented and understandable downgrade method to a previous version of Netdrive which works properly with SFTP.

Looking forward to hearing from you. 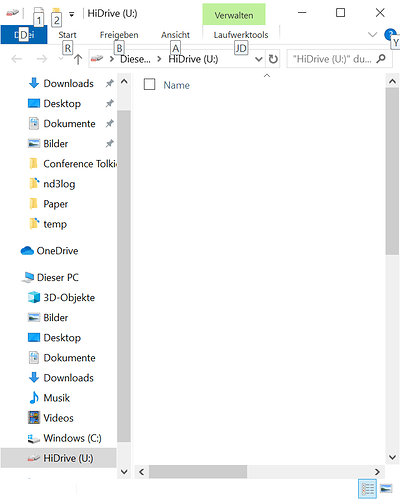 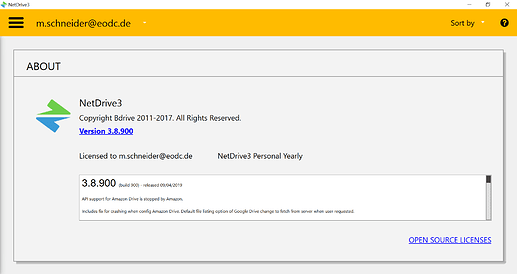 Confusing: after Netdrive (which was freshly started after reboot directly after the last update to 3.8.900) failed due resulting in an empty folder I just closed the app and started in again. Now I’ve got the same result as in 3.8.898 but even more confusing: folders with year or time as prefix are mixed with folders correctly displayed 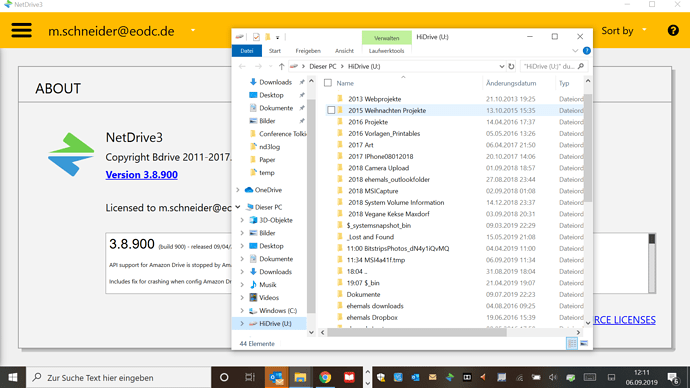 Please fix the problem! it is bnot possible to work like this!

It is unacceptable that the program hasn‘t been working for a week. It is weekend again, and there is no update or reply from anyone. Frustration is starting to rise. After all, we are paying customers. It has been days since the 1st time we informed.

by the situation here and almost desperate

, I tried to find an alternative workaround with SFTP suppport, since WebDav is not a real alternative for me for security reasons as well as regarding MS Office handling.

I managed to install a workaround parallel to NetDrive and use this alternative until buggy Netdrive is repaired: WINSSHFS. 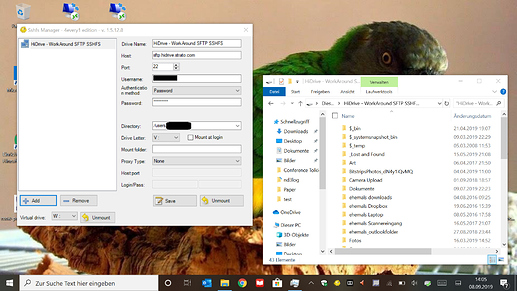 As you can see, WINSSHFS displays all folders and files correctly (unfortunately unlike the current NetDrive version).

I can’t really recommend my workaround for normal users.

The installation of the open source tool is a pain in the a**, numerous frameworks have to be added until the software runs (MS Visual 2013 Runtime, Dokan library, several reboots, etc. - all not included in the distributal setup).

In addition, spooky shadow drives are faded in (spooldrive), which disappear when unmounted.

WINSSHFS is also not bug-free:

so the unmount doesn’t always work, sometimes you have to help to terminate it with the task manager.

And: there are also minor bugs in connection with MS Office via SFTP which have not been solved in the Open Source community for months: e.g. you can open an Office file by double-clicking from the SFTP drive and save a new file without problems, but it is not possible to create a new file in the drive with 0 bytes with right mouse button > “New” or to save and overwrite an existing file with the same name directly from Microsoft Office (error message because of alleged missing permissions). If you save it under a new name it will work again. If you use alternative software like Libre Office everything is fine any you can even overwrite a existing file.

So this is all just a “semigood” work around.

We need our Netdrive3 with propper SFTP service and general prompt support again or alternatively a documented and traceable way confirmed by the support to a working downgrade (best with a link to the actually tested and working binary version).

It is not okay to use paying existing customers as involuntary beta testers.

Sorry for the frustrations. We are working on the issue now and doing more test before release.